Location/Setting: This boulder is located at the entrance to a housing estate (Coves Brook) on the outskirts of Carnew. It is not in its original location, but was probably found somewhere nearby, as there a number of other boulders dotted around the housing estate.

The Rock: This granite boulder, measuring 1.6m (length) x 1m (width) x 0.80m (height), is currently set in a vertical position, but was probably originally horizontal, as is suggested by plough marks on the upper part of the boulder.

The Art: This is one of Wicklow’s most elaborately decorated panels, and is also the most accessible. The motifs are concentrated on a slightly concave surface (over an area 0.6m x 0.6m), and consist of a number of cupmarks and three cup-and-ring motifs. The uppermost cup-and-ring motif consists of a central cupmark (5cm diameter) enclosed by two rings (external diameter of outer ring is 17cm), with a radial line (23cm) extending southward. 14cm beneath this motif, there are two conjoined cup-and-ring motifs. The more southerly motif consists of a central cupmark (5cm), enclosed by three rings (outer ring external diameter = 31cm), and possibly the arc of a fourth. Attached to its northern side is a larger cup-and-ring motif, with a central cupmark (5cm) enclosed by three rings and the arc of a fourth (minimum external diameter = 38cm), all of which respect the other cup-and-ring motif. To the naked eye there are around 8 cupmarks visible. However, the 3D models indicate a possible 18 cupmarks – two above and one below the radial of the upper motif, which also appears to have a further five possible cupmark just north of it; four along a ridge on the southern end of the decorated face; two above the smaller of the conjoined cup-and ring motifs, and possibly two between its first and second ring; one within the inner ring of the larger conjoined cup-and-ring motif, and another touching its third ring. 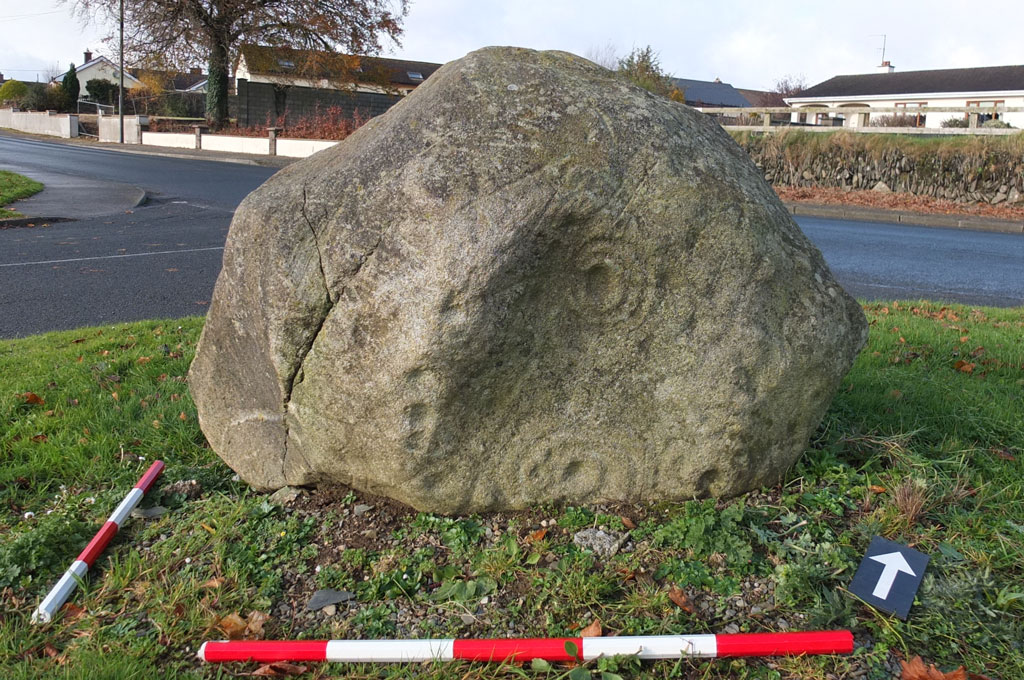 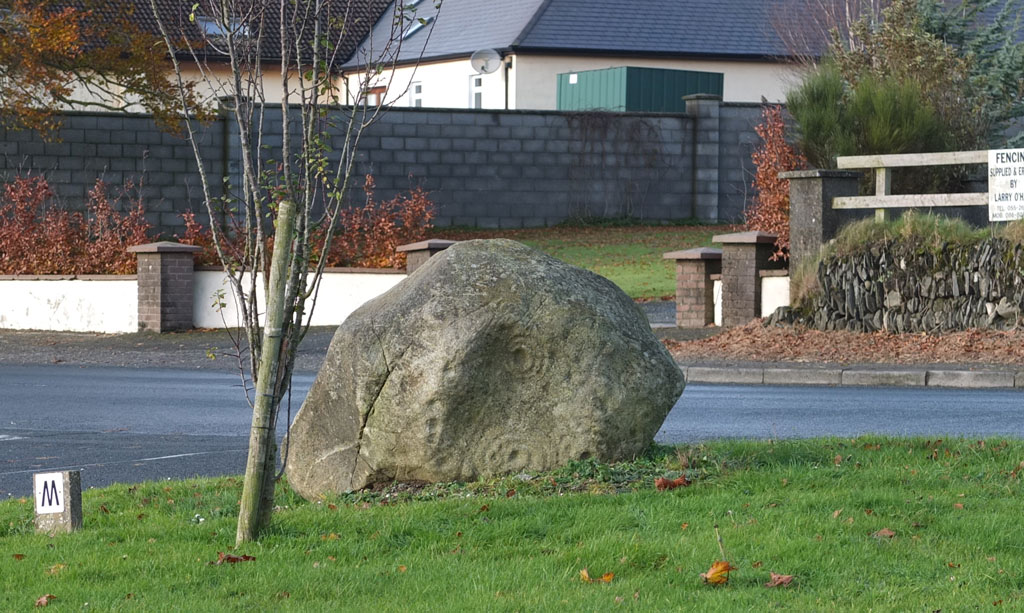 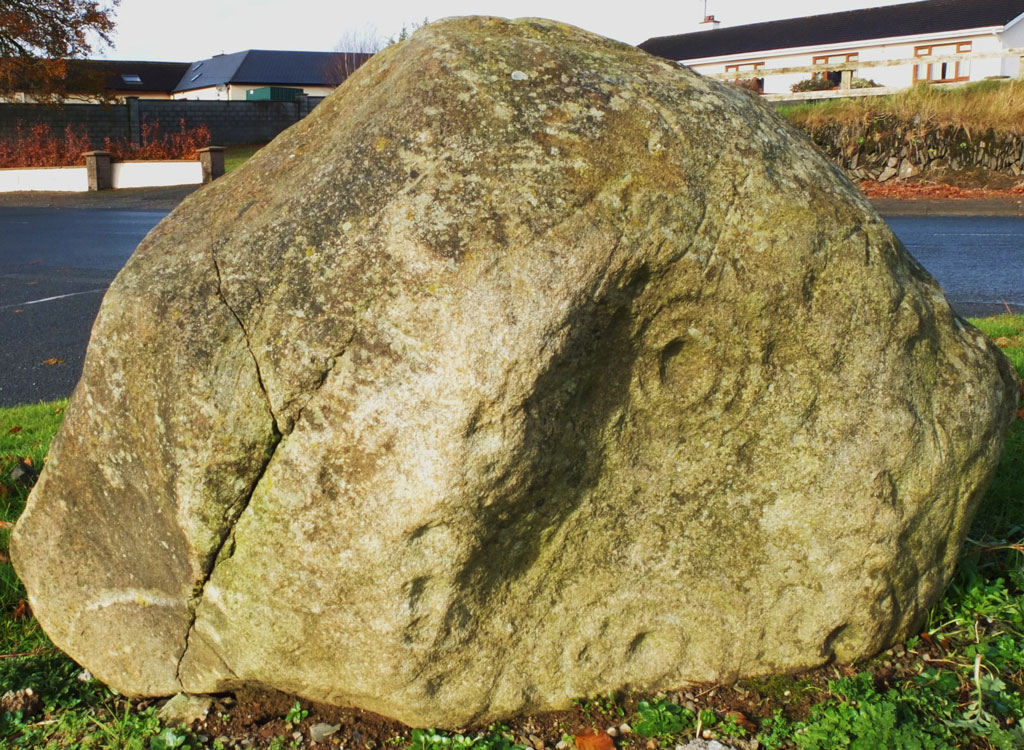 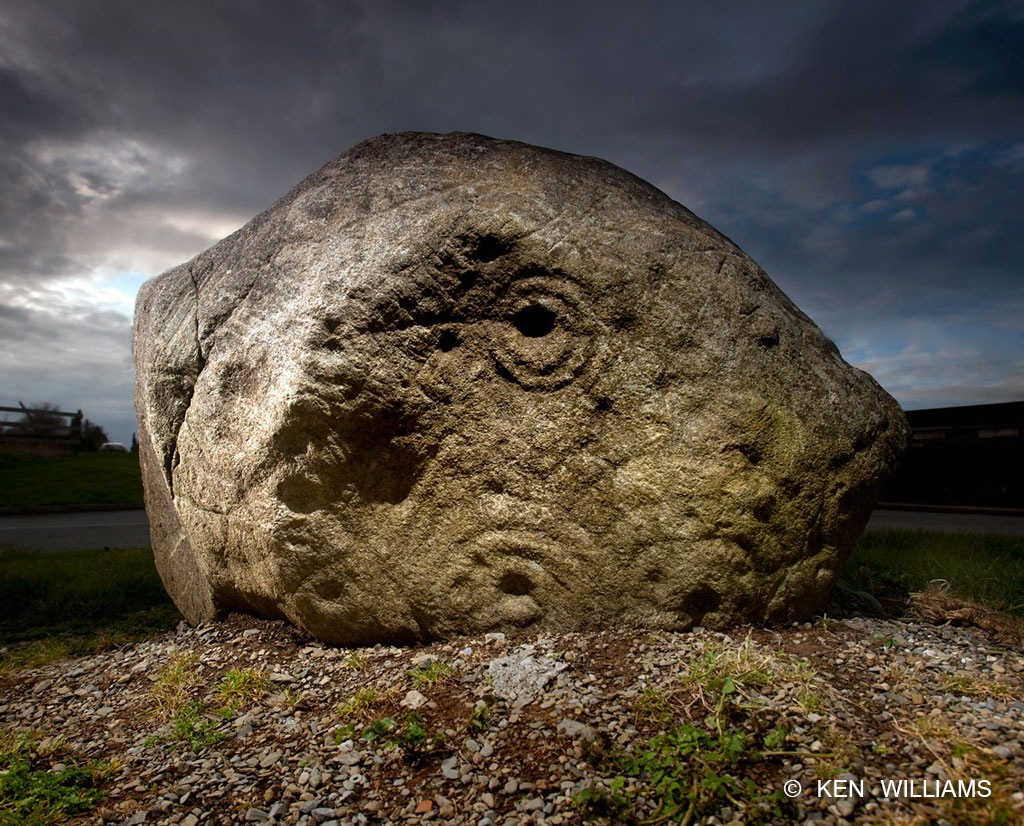